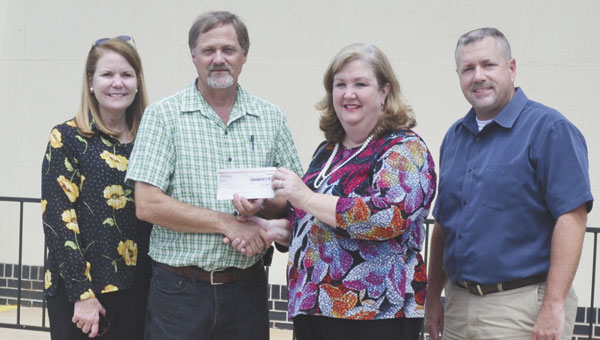 Past chamber president Anne Hetzel received the check from Frontier general manager Cereal Daniel on Friday. They were joined by Dale Ash and Chris Singleton.

Frontier Communications recently presented $5,000 to the Atmore Area Chamber of Commerce, in recognition of the chamber’s participation in the America’s Best Communities (ABC) competition.

Frontier, Dish Network, CoBank and The Weather Channel sponsored the competition, which was intended to jumpstart economic development and investment in rural America, according to Cereal Daniel, general manager for Frontier in Atmore.

“The sponsors of the ABC competition respect the hard work the Atmore community demonstrated in the competition,” Daniel said. “Atmore leaders worked diligently to develop their proposal, and we want to reward them for their effort. Our hope is that the community gained valuable knowledge and experience by going through the process.”

Anne Hetzel, who served as the chamber president last year, said that the chamber was appreciative of Frontier’s generosity.

“We are very humbled and grateful for Frontier’s gift to us,” Hetzel said. “We will take time in considering how this money will be used to help the community.”

Hetzel said that Atmore did not advance to the next stage of competition, but noted that only Statesboro, Ga., qualified for the quarterfinals among Alabama and its bordering states.

Macon County, N.C., and Georgetown, S.C., also advanced to the quarterfinal round. There were 50 communities chosen for the quarterfinals out of an initial pool of more than 400 applicants.

America’s Best Communities is a multi-stage three-year competition that will provide seed money and other support to communities as they develop new economic strategies. For more information on ABC and its Adopt-A-Community Program, visit online at www.americasbestcommunities.com.