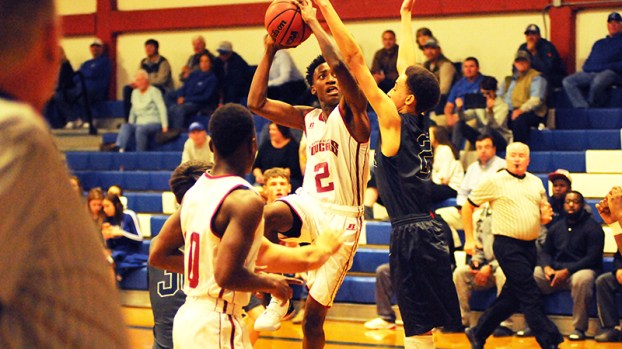 Staying in your lane.

That’s what Escambia Academy did in a big second period en route to a 79-58 victory over Central tonight to win Jay’s boys Christmas tournament.

The Cougars got off to a slow start in the first period, only leading 19-12, but shifted gears to outscore Central 19-5 to lead 38-17 at the break.

EA’s big key during the second period was taking care of the back-end of Central’s transition game, forcing the Florida team to put the ball in the middle and getting turnovers, Cougars assistant coach James Lee said.

Louie Turner, who was one of four players who finished in double figures for EA, ended the third with a turn-around jumper off of an offensive rebound and MJ Jones drained a pair of free throws to give the Cougars a 62-37 advantage.

Bryant Quimby started the fourth period with a 3-pointer and gave the Cougars a 30-point edge.

Central’s Billy Mellon made three 3-pointers in the fourth to keep his team in the hunt.

In the first half, EA’s Tiquale Taylor scored 14 of his 18 points.

In first-round action at the tournament, the Cougars beat Jay 78-67.