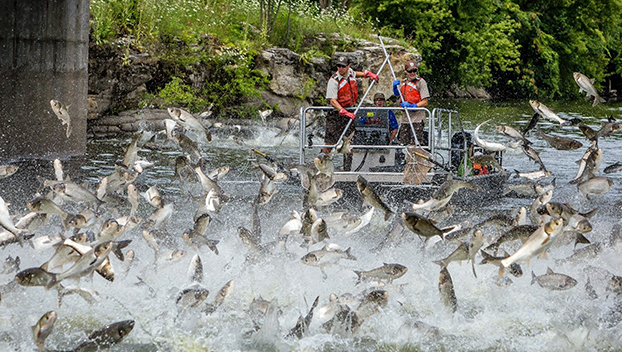 Chris Greene is cautiously optimistic that an invasive fish species that can wreak havoc on reservoir ecosystems has not expanded its range in Alabama’s waterways.

The silver carp, which has done noticeable damage in Kentucky and Tennessee waterways, has been found in Alabama’s Pickwick and Wheeler reservoirs.

Thankfully, the feared spread of the fish, highlighted in numerous YouTube videos for jumping when startled by boaters, has not materialized, said Greene, Chief of Fisheries for ADCNR’s Wildlife and Freshwater Fisheries (WFF) Division. Only Pickwick has a moderately abundant population of silver carp, and Greene hopes that population stays contained to that reservoir.

“We’re relatively new to this situation,” said Greene. “Silver carp haven’t been in Alabama for very long. We’ve only had federal funding specific to Asian carp work since October of 2019, so we’re still in our first year of funding. So far, work has involved the acquisition of field gear, sampling equipment and staff training. We’re still awaiting our primary sampling boat, which we hope to get this fall and do more intense field sampling.”

When the new boat arrives, Greene said it will allow WFF personnel to target the collection of silver carp to determine population dynamics.

“We’ve been sampling with our standard shock boats,” he said. “The new boat will be more specialized with a rectangular frame and net attached to the front of the boat where you can actually trawl through the water. It will still have electrodes hanging down like a standard electrofishing boat. So, you’re moving through the water collecting carp in areas where they tend to congregate.

“It’s a learning experience. We’re learning from other states like Kentucky and Tennessee. They have been doing this a whole lot longer than us. Hopefully what we learn from them will make our sampling more effective.”

The good news for Alabama is silver carp have had a limited range since the first one was detected in state waters about five years ago.

“Our limited field sampling has not yielded any silver carp outside of Pickwick Reservoir in Alabama,” Greene said. “From what we have been able to determine from angler catches, the farthest upstream location where silver carp have been confirmed by a commercial fisherman in Alabama is Wheeler Reservoir.

“Angler reports have been infrequent in Alabama. Most of those have come from Pickwick Reservoir. So, we believe the leading edge of where we have a moderately abundant population is Pickwick.”

“We ask any anglers who are out on the water to let us know if they see a silver carp,” he said. “They are our eyes out there. We can’t always be on the water, so we ask anglers who see any silver carp or bighead carp, please report those to asiancarp@dcnr.alabama.gov.”

Greene asks that reports, locations and photos of silver and bighead carp be sent to that email address.

In an effort to deter the spread of the invasive fish, the Alabama Department of Conservation and Natural Resources (ADCNR) issued a new Wild Baitfish Regulation that deals with the capture of live bait in Alabama waters and restricts the movement of that bait to other water bodies.

“We enacted a regulation in Alabama to reduce the spread of Asian carp,” Greene said. “Young Asian carp closely resemble other live baitfish that are commonly used by anglers – skipjack herring, gizzard shad and threadfin shad. If we have anglers going out throwing cast nets and catching several species and taking these to other water bodies, it could increase the spread of Asian carp.”

The regulation states that if anglers catch bait on a specific body of water, that bait cannot be transported live to another body of water. It also restricts the import of live, wild-caught baitfish from other states.

The Tennessee Valley Authority (TVA) is considering several methods to control the spread of Asian carp, including fish barriers at 10 locks controlled by the TVA. One type of fish barrier under consideration is a Bioacoustics Fish Fence (BAFF), which utilizes a combination of sound, light and air bubbles. This type of barrier is installed at Barkley Lock and Dam in Kentucky and is currently being studied for its effectiveness in deterring Asian carp. Other types of barriers used for Asian carp include the use of carbon dioxide or electricity. TVA is conducting environmental impacts on the deterrents to minimize the impact on native species.

TVA is also considering adjusting river flow rates during potential Asian carp spawning periods, which are usually during high-water events. Studies have shown that Asian carp eggs are only semi-buoyant and will sink to the bottom and die with low river flow.

“For those eggs to mature, there must be long stretches of flowing water from larger tributaries,” Greene said. “You have this series of dams on the Tennessee River, so it really doesn’t provide the habitat requirements for the eggs to mature and develop. But some of the major tributaries on the Tennessee River have long flowing stretches. The concern is if carp get up into these tributaries and we have a weather year with a good amount of rain, the potential does exist in certain places.”

Silver carp have been compared to feral hogs in the damage done to an ecosystem. Feral hogs outcompete native wildlife for food and habitat resources. When silver carp become established in an area, they interrupt the natural food chain and native species end up negatively impacted.

“Silver carp are filter feeders,” Greene said. “They are planktivores. They filter out plankton throughout the water column. This puts them in direct competition with baitfish and young game fish as species like bass and crappie are planktivores in their early life stages. There’s more competition at the base of the food chain. It also affects baitfish species as adults. You’ve only got so much biomass that particular water body can support. The more taken up by Asian carp, the less will be taken up by the native species.

“The problem with silver carp is once they come into a water body, it becomes a management issue. You never really get rid of them. It’s like feral hogs. You just have to manage them. You can never fully eradicate them.”

As the boaters and anglers saw in the aforementioned videos, silver carp also pose a safety issue for recreational activities on the waterways.

“Once silver carp get scared, they jump out of the water, which can be hazardous for someone in a bass boat or on a jet ski,” Greene said. “It’s definitely a safety concern.”

Alabama continues to work with the Tennessee Wildlife Resources Agency and the Mississippi Department of Wildlife, Fisheries and Parks to collectively manage the spread of silver carp. Joining the fight on a larger scale is a multistate group called the Mississippi Interstate Cooperative Resources Association (MICRA), which includes the 28 states in the Mississippi River basin. The U.S. Fish and Wildlife Service, U.S. Geological Service, TVA, U.S. Bureau of Reclamation and two Native American tribes are also members of the coalition.

Several years ago, Tennessee Tech received federal funding to monitor numerous lakes, including Pickwick, for silver carp. One of the goals has been to catch silver carp and insert sonic tags to allow tracking of the fish’s movements.

“Tennessee Tech is still doing the tagging studies, and they’ve even got detectors set up on some of the TVA locks in Alabama,” Greene said. “From my understanding, none of the silver carp they’ve tagged in Pickwick and other places have gone through any of the locks in Alabama. At least that was the case just a few weeks ago.

“To date, we have not had any confirmed reports of silver carp in Guntersville Reservoir or Wilson Reservoir. We certainly hope it stays that way.”

Greene said concerned anglers and those interested in mitigating the damage done by invasive species can help by purchasing the Alabama freshwater fishing distinctive license plates, which recently received a new design.

“Proceeds from the sales of this license plate are earmarked for specific purposes, and one of those is the control of aquatic invasive species, including Asian carp,” he said. “We’re excited about this.”