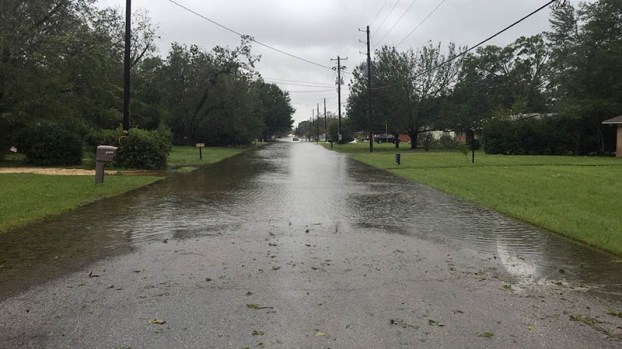 UPDATE: Atmore residents are beginning to clean their yards of debris from Hurricane Sally’s impact.

Some of the residents are helping others in their neighborhoods.

Several streets remain covered in water. Motorists are encouraged to seek alternate routes if they must get out.

All residents in Atmore are in the same boat as Hurricane Sally made its way over the area.

Mayor Jim Staff said this morning that everybody is without power and that most roads are flooded. He said the the waters began to build up at about 8 a.m. At present, there are some 5,600 without power, Alabama Power officials said. 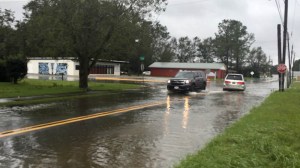 Flood waters at the intersection of Medical Park Drive and Church Street.

“As much water that’s fallen, there isn’t anywhere for it to go,” Staff said.

At approximately 5:30 a.m., Hurricane Sally made landfall near Gulf Shores as a Category 2 storm, bringing with it torrential rainfall and damaging winds.

Staff said he believes at around 3 p.m., the worse of the storm should be passed.

Since yesterday afternoon, the Atmore Fire Department — with all hands on deck — has responded to a few downed trees.