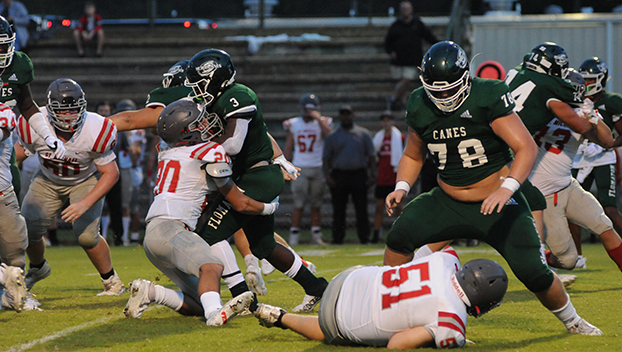 The Hurricanes’ varsity players fell 15-14 in the first half, but the junior varsity team outscored the Cardinals from Fairhope 14-8 in the second half.

“It was a very good game, we were evenly matched,” FHS head football coach Doug Vickery said. “They’ve got a good football team.”

In the first half, Zeb Vickery found receiver Quinton Odom for a 29-yard touchdown pass with 9:25 in the first quarter.

St. Michael answered with a 9-yard touchdown rush a short while later, and the game was tied 8-all going into the second quarter.

Vickery said the coaches were looking for the boys to be physical tonight. He said coaches also were looking to see how the Cardinals ran against them.

“We’ve got a lot of good game football we can work with the boys on,” Vickery said.

Next week, the Hurricanes will host Northview, Fla. to begin their regular season.